Takashi Nakagawa is the lead vocalist of the rock band “Soul Flower Union”. After the Great Hanshin-Awaji Earthquake, the band started going to evacuation shelters to perform “Demae-imon-live (delivery of live music to comfort the victims)” in the style of “chindon”, or traditional Japanese marching bands. “Mangetsu no Yube (Full Moon Evening)”, a song created through these live performances, became one of their best-known songs. With a musical style that continues to evolve, encompassing traditional music, jazz, latin, and folk, and performances that exemplify how music can resonate with people as seen through how their songs comforted the victims of the disaster area and healed their wounds, the band has continued to attract a great deal of attention. They went back to performing their “Demae-imon-live” after the Great East Japan Earthquake. In this interview, we ask them what urges them once again to perform music in those devastated regions and what they believe their activities can accomplish.

I was twenty-nine when the Great Hanshin-Awaji Earthquake struck us. I was living in the Hokusetsu region, and the ground did shake quite a bit. During the first week after the quake, I was in such a shock that I just stared at the TV being terrified of the after quakes. And then, Hideko Itami, one of the members of our band said, “Let’s go out to sing.” “The elderly at the shelters are going to want entertainment sooner or later.” She had this firm conviction from the very beginning. And I ended up being surprised at how right she was later on…

Soul Flower Union is a type of band that you would call a rock band. At that time, it was a bit difficult for me to imagine us singing folk songs in front of old people. But then, what can we say without even trying once? It was about ten days after the quake when we made up our minds. We started calling all the volunteer groups we could think of. “We’re rock musicians, but we can perform folk songs and oldies,” we told them.

In February, people started calling us, and we did our first live performance on February 10, at a school for the handicapped which was a make-shift shelter back then. After that, we went out to perform about every three days. “Come to our place next!” The volunteers would ask us to visit them. The people that were helping out in Kobe were those who supported their communities even before the disaster occurred, like helping the handicapped or the residents in skid row. So you could feel the support network expand instantaneously, not only in the Kansai region but throughout the entire country.

Our voices and instruments were all we need

Because Soul Flower Union was a rock band until then, we needed the help of PA (*1) systems or numerous staffs; in other words, to do our performance, we needed a well-prepared system. But then, we suddenly realized that all we need is our voices and instruments, and we can perform anywhere. That was huge for us. Right after the earthquake, lifelines were still under recovery, and we didn’t have electricity yet. So instead of playing electric guitars we switched to sanshin (three-stringed Japanese lute), replaced keyboards with accordions, and our female musicians tried out chindon-style drums. We changed the concept of our band so that we can try acoustic instruments that we’ve always been interested in but never tried out until then. About a year before the earthquake, I was actually starting to get interested in folk music, and was playing around with the Okinawan sanshin and inviting musicians from Okinawa as guests to our live performances. It was also the time I was really into old 78 rpm records and listening to them fanatically.

At our live performances at disaster areas, we only sang one original song of ours, “Mangetsu no Yube (Full Moon Evening)”, and our repertoire leaned heavily on songs to which the elderly could sing along, like folk songs and pre-war oldies. Actually, through our experience in Kobe, there was a change in our attitude toward music. Until then, for example, when our band used to be called Newest Model (*2), we thought, “Our music is a type of art, so we will perform for those few that understands us.” But after the Demae-imon-lives, we really wanted our events to be more like festivals in small villages; a place that anyone can come by to join and leave feeling refreshed.

Crying out loud, laughing, and getting angry—showing your emotions is important

When the earthquake struck Kobe, I was able to write the song “Mangetsu no Yube (Full Moon Evening)” after a month, but with the Great East Japan Earthquake, words failed me and I was at a loss. For the first two months, I didn’t even feel like listening to someone else’s music, and didn’t want to write any new songs of my own. This was not only that I had grew old, but also because the disaster caused by this earthquake was unprecedented, nothing like this had happened before, and there were so many thing going on in my head. I was still trying to wrap my head around everything. The earthquake, the tsunami, and the nuclear reactor accidents. The differences in the attitude towards the disaster were apparent between the regions. Everyone was on edge. So during the first two months, it was impossible to listen to someone else’s music and say, “This is good.” All the other musicians and writers all said they felt the same.

In March and April, I started doing some live performances and new recordings, but was still in agony, feeling that my turn to help out will be here someday.

Then, in the beginning of May, a friend of mine who was volunteering at Ishinomaki said, “Hey Nakagawa-san, isn’t it about time?” and that’s when I finally kicked myself into gear. Two months had already passed since the disaster, and people at the shelters were getting into quarrels over the minor things, and everyone was irritated, so it was time for some entertainment. I guess people had to shut down their emotions. Shelters are places where you don’t have any privacy, and everyone was just exhausted. We just need to have a good cry or a laugh, release our anger, and show our emotions once in a while.

We did many demae-performances in the Tohoku region in 2011, but the first time we did a live performance at a shelter in Onagawa was the most unforgettable moment. There was this middle-aged guy staring at our performance, with a facial expression that is hard to put into words. After our performance, he came up to shake hands with us. “Music is really great,” he said twice, and then he started to cry out loud still holding on to my hand. “We’re going to come back, so you have to take good care of yourself.” That was all I could say to him. Later, I heard that the tsunami took everything from him; his children, wife, parents, home, and job. Maybe he was able to express his sorrow, “blaming” the music to cause his emotions burst out.

Something similar actually happened in Kobe too. On February 10, 1995, we did our first performance at a shelter, and this old lady came up to us. You could tell that she cried her eyes out, but she put on a big smile and slapped me on the back. “Thanks, young man. I lost my husband and my children in this disaster. But I couldn’t cry. Everyone around me went through the same experience, you know. But listening to you sing ‘Arirang’, I was finally able to let my tears flow.” I will never forget that moment. The slapping sound she made on back is a memory that keeps me going.

People ask me why I continue to do this activity. Music allows us to spend a good time together, and that’s so precious. Of course, getting drinks and chatting together with everyone after the performance is one of the fun parts. I can’t exactly articulate why this means so much to me. I also feel very honored to be able to keep singing “Mangetsu no Yube (Full Moon Evening)”, a song that has come to be loved by so many people. No matter how many times I sing this song, and no matter where it is that I perform, it always takes me to a new landscape, shows me a new perspective. Some people ask for another song like “Mangetsu no Yube (Full Moon Evening)”, but I think it is enough to have just one such song.

Finding your own way

So what is it like to perform at an evacuation shelter or temporary housing? Since most performances are done in the daytime or before supper, there’s usually a lot of elderly and children. It was quite natural that we chose to focus more on folk songs and oldies, early on since after the Great Hanshin-Awaji Earthquake. This time, members of our group were already volunteering to help at the disaster site, so by March or April, we were calling each other and sharing information almost every day. And one day, I thought to myself, “Since we are going to perform there soon, what kind of songs should we sing?” I began doing some research and found these two songs “Oira-no-fune-wa-300-ton (My boat is 300 tons)” and “Saitarabushi”. We have played these songs like a million times in Tohoku, and there was no way not to include these songs in our new mini album “Kiseki-no-nagisa (On the beach of miracles)” (*3).

There is this story from the Great Hanshin-Awaji Earthquake that left a strong impression on me. A group of young people who came to Kobe to help out once a month always went out to get some drinks after they finished their volunteer activities. At first, everyone else was like, “what are they thinking?” and thought that getting drinks was really inappropriate. But it turned out that their activities lasted the longest. So what is important is that we find a way that suits each of us best. Otherwise, it will be impossible to continue these activities. “Soul Flower Earthquake Fund” (*4), and “Demae-imon-live” are what I found that works for me.

*2 A band Nakagawa started with other members, and also the predecessor of Soul Flower Union.

*3 The mini album includes songs from the band’s repertoire from their “Demae-imon-live”. “Kiseki-no-nagisa (On the beach of miracles)”, a song about the miraculous encounters with people of Tohoku which prays for the regeneration of the region is one of the songs in this album. Released on December 21, 2011. 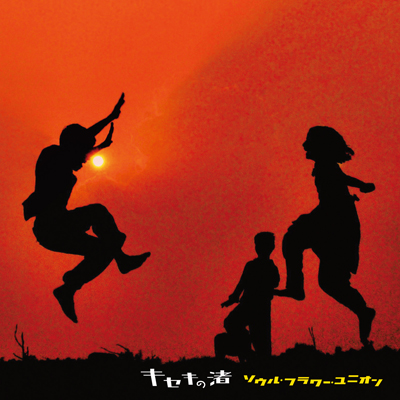 *4 A fund established to especially help those affected most by natural disasters (elderly who need care or handicapped people who cannot live on their own). The founder, Hideko Itami, decided to create a fund after the Great Hanshin-Awaji Earthquake. To help the victims of the Great East Japan Earthquake, the fund has given gifts such as guitars and cars to them. 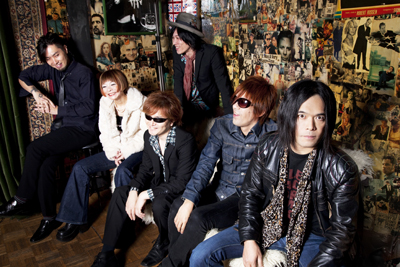 In their songs, Soul Flower Union grieves over the disaster caused by the Great Hanshin-Awaji Earthquake and the harsh realities of regeneration following it, and shows the determination of the victims facing the hardship. On the day of the earthquake, the full moon was in the sky. The band Soul Flower Union is based in Kansai, and their squad called Soul Flower Mononoke Summit went to many of the shelters in disaster sites. In 1995 only, they did over 100 performances.

Anyone affected by the earthquake

Playing music at the disaster sites

Their performances help one to express their true emotions. Those in the devastated regions after natural disasters must be “holding back” their true feelings all the time so that they can “put all their effort” in overcoming the hardships and move on. What this band does is fill those in pain with tenderness, embracing and gently nudging them through the performance.

Different sites in the region affected by the disaster