The Circumstance leading up to the publication of "Does the Great Hanshin Earthquake Change Theater?"

<Premises – My situation at the time>

On January 17, 1995, I was in Tokyo.it was the first time in years that I went on a trip.If I stayed at home, in the house that was semi-destroyed, I would have been severely injured.By a pure coincidence, I narrowly escaped death.Our house is near JR Rokkomichi station in Nada Ward.It is one of the disaster-stricken areas.

As I watched the news of the earthquake from Tokyo, the thing that I first thought was, “theater will save people now.” And it’s really embarrassing to admit, but I also thought, “when I return, I will photograph the afflicted area”.Foolishly, I even bought a disposable camera.The typical ideas of someone who does not know the pain firsthand.Indeed, as I returned to the afflicted area, there were crowds of “disaster area tours” that had come from elsewhere, and many people were wandering while taking pictures.They even came into the homes, and we were exposed to insensitive stares.

My mother called me to say, “there’s no food. Stay in Tokyo for a while.”So I stayed in Tokyo for about a week before going back home.

And I arrived home.What I saw there … cannot be expressed in one word.It is painful even to recall.Anyway, I quickly understood the harshness of the situation, and that this was no time to be taking photographs.I realized the difference in perception with those outside of the disaster area.Even a Kobe native like myself, who was in Tokyo, thought carelessly about taking photos.

But reality awaited me.The deadline for the theater magazine “Theater Arts” was approaching.The deadline was January 19th, and I promised the publisher to wait until the last minute.But … I couldn’t write.First, for physical reasons.It was my job to go to the SD garrison every day to go to receive water.The water was heavy.There was a lot of physical labor involved in other tasks, my muscles were in pain from the unfamiliar work. My body was groggy all day, and I was sleepy all day.I can not think about anything.Also, there was only one usable room in that semi-destroyed house, and the entire family went up to bed and lived there together, so there was no time to be alone.And for mental reasons.Every day, as I went to get the water, I passed by the completely destroyed houses in the neighborhood.Many people have died there.Every time I passed in front of a destroyed house, the tears would not stop.Adding insult to injury was my doubt of theater. “It can’t save anything.What can theater possibly do for us now?” I wondered in doubt.I didn’t even want to see a theatrical performance myself.What was needed was water, food, electricity, gas, clean toilets, and a bath.

Someone with doubts about the power of theater, cannot possibly write about it.

There were many times I almost picked up the telephone to call the publisher, to tell them “I’m sorry, please drop my manuscript this time”.I was deeply conflicted.It was hard.

But I wrote.I still don’ know why I could write it.Perhaps it was because I thought, “I’ll just write this present conflict as it is”.And my resolution to “keep living.”Living in the afflicted area, at the beginning I felt guilty about having life, thinking to myself, “why did I survive?”According to what I heard later, this was part of victim psychology.Immediately after being saved, one feels excited, but afterwards, that emotion falls dramatically.When so many others have died, one starts thinking “why did I survive, when there were so many others who ought to be alive right now too?”There is a fall in self-esteem, and one begins to think that they don’t deserve to live.

That feeling could not be shaken off for a while.I was able to recover from such feelings.I was able to say to myself, “I will keep living.”

The piece I wrote at that time for “Theater Arts” Issue 2, was “Going beyond death – For the Reconstruction of Kobe.”

<Leading to the Publication>

There was a feeling that the theater might change with the Hanshin-Awaji earthquake.

With the end of the war, the student movement, the arrival of the bubble economy, theater in the 1980s seemed peaceful at first sight, and many were filled with bright laughter at first glance.However, behind it, there seemed to be an invisible anxiety lurking, that something was about to happen at any moment.

And in 1995, the Great Hanshin – Awaji Great Earthquake occurred, as well as the sarin attack on the subway.Both of these incidents made us realize that this ordinary life that we thought would be endless, was one day, suddenly overcome with the unordinary.Everyday life and unordinary, is only separated by a thin skin.

A new era of perception might be born.As I talked about such things with play critic Yoichi Uchida and Hiroshi Seto, they decided to record the earthquake disaster from the point of view of the theater. That is how “Does the Great Hanshin Earthquake Change Theater?” was born.

(Mr. Uchida and Mr. Seto may have another view, but I published it with that idea in mind). 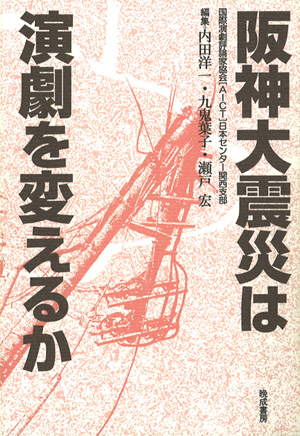 After the Great Hanshin-Awaji Earthquake (hereinafter referred to as the Hanshin-Awaji Earthquake), records were compiled in various fields such as disaster prevention, medical care, mental care, volunteer, education, etc., but in the world of culture and art, such movements were not seen.It seems that unforeseen disasters like Hanshin were considered irrelevant to cultural people and artists.But are they really? Those involved in the publication of this book confronted themselves with that question.As long as we are pushing the disaster into oblivion, as a matter unrelated to us, no cultural significance can be born.Only by thinking about what died, and what was born from disaster, can it bear symbolic significance as a turning point in history. Earthquakes never speak directly to people.Earthquakes are mirrors that reflect the times dramatically, and observing the details in that self-portrait that emerges is the start of something. This is a modest attempt to make that observation through the medium of theater.(※ Extracted from “Does the Great Hanshin Earthquake Change Theater?”)

This book was written with the hopes that the record of the struggle of a theater person, in the year 1995, a turning point in history, will lead to hope for the future. (※ Extracted from “Does the Great Hanshin Earthquake Change Theater?”)