Hisako Hara has been working as a freelance art producer, editor and writer after working at Kyoto University of Art and Design.In addition to being involved in the planning and management of magazines and book editing planning, exhibitions and art events, workshops, etc., her interest in art that is practical and rooted in local communities has led her to be a part of an NPO organization.Since 2005 I have been teaching art management as a professor in the department of General Information at the Osaka Electro-Communication University.Ms. Hara talks to us about her projects deeply related to earthquake reconstruction that she was involved in, and her thoughts throughout the journey .

The “Kyoryuchi Eigakan” (Settlement Cinema) (* 1) I was involved in was held in 2001 as part of the earthquake disaster reconstruction project.Commissioned by Kobe City, CAP (Conference for Art and Planning), of which I am a member,was in charge of planning and production, and made various proposals.

For example, for the project ” BIGSMILE 2001,” we projected the smiling faces of the 2001 citizens on the wall of the Kobe municipal museum.We visited several locations from kindergartens, company offices, to individuals, to capture photographs, which was compiled into a slideshow.The images changed every 5 seconds, so to see it all takes several hours, but those who appeared in the photographs came over on the day of the event and every time they found a face of themselves or a friend, there was cheering, which generated even more smiling. This project was about showing the smiles that were recovered.

Light and shadow, walking in the streets, things that can be found in the city and in relationships

I was in charge of a project called the “Slit Show.”It was a program that projected images on the gaps and exteriors of buildings in the settlement, and invited visitors to go about town viewing them.

The purpose of this program was to make the entire settlement area into a movie theater as an ode to Kobe being the first place in Japan to screen a movie. In most cases, traveling was only a means of getting from point A to point B. For example, people only went to Motomachi to go to Daimary (department store) so the idea was to get people to walk through the city of Kobe, among the light and shadow, being conscious of the streets in which they were walking.I wanted them to look around and see the projections throughout and be surprised.

Light and shadow are not tangible.But the shadow, especially, is something that can not appear without an entity. During the recent earthquake I was reminded by how people are too attached to “objects” such as buildings.Rather, shouldn’t we discover different things through the city as a whole, and the relationships in it?I wanted this project to be a device that intentionally produces these things.

We did what we wanted to do, what we thought would be nice, rather than fixating on trying to do a project that led directly to reconstruction of the community.We didn’t want to force anything.Instead of proposing projects that art people would typically come up with, and raising an issue, we wanted to create an experience that allowed for people to recall forgotten things by taking a walk.

The participating artists were not just people from the Hyogo Prefecture or Kobe.I invited artists whose past projects seemed interesting.

The name of the program, Slit Show, was also decided during a conversation about the principles of film and projection of shadow art, and the installation locations of gaps between the buildings. Unlike the public housing on Minami Ashiyahama, the project was on a different dimension than constructing buildings.

I participated in the project “Minami Ashiyahama Community & Art Plan” (※ 3) at the Minami Ashiyahama’s disaster reconstruction housing from the beginning of 1997 as an art director.

When a new town was created, we held workshops with prospective residents and those interested to think about how to deal with those problems. These workshops were held regularly in order to activate communication, to create a new community, even before the buildings were built. Community is not born spontaneously at the housing complex, so we attempted to make places where people could meet face to face in advance. We wanted people to feel content about being able to gather, whether that is being able to let out their inner turmoils two or three years after the earthquake, or give a release to the hearts of people who missed the opportunity to do so.

The significance of sharing spaces and experiences

In this project, we have set up some permanent artworks in the reconstruction housing. Along with those artworks that can still be viewed, continuing the workshops was an important pillar of the project. By doing various activities together, not necessarily limited to art workshops, it becomes easier to create a sense of community even after they move to the new location.

For example, artist Ritsuko Taho created work that imagined a terraced field. Terraced fields, as a form, are considered a part of the classic Japanese landscape. In the house, closing the door isolates. This work functions so that when one goes outside, there is a space to water the plants with others, or taste the fruit of the harvest, and share other experiences.

Art that functions as part of life

For the project in Minami Ashiyahama, we wanted to do an art project that would function as a part of daily life, rather than install an outdoor public sculpture like in Nishimiya or HAT Kobe. We wanted the residents to be on board with the concept we had.

We created a manual that summarized the concept and maintenance method of artwork and distributed it to all tenants so that it would function for as long as the communal housing facility existed. It is very difficult for the original concept to take root in the daily lives of the tenants once different tenants start to move in and out.

We wanted to improve this place, and worked on the project while trying to remain humble. There was a lot of attention from the outside at the time, as a pioneering example of what we were doing.

The challenge is continuity and the presence of a key person

However, looking back, a major challenge remained in regards to continuity. Although the workshops continued frequently for about one year, it was difficult for all the residents to maintain activities with the same emotional investment, and there was an attitude of participating because there would be someone coming specially for it. The average age of the residents was over 65 years old, and there were many people who were already burning the candle at both ends just in their daily lives.

There were other complicated issues, such as a change in the management of the housing complex itself, and the maintenance of the artwork not properly passed on during the transition. It might have been different if I had lived there myself, and been there to speak out on the issue.

In order to continue activities and maintain relationships, I realized that it was necessary to have a contact person with whom to communicate regularly. When it ceases to go through people, the meaning of the artwork itself will weather. For this projectto function, a “person” was needed.

Reflection giving birth to the future

It is important not to end up just reflecting on this experience, but how to make use of the reflection in the next steps. This project was incorporated as a part of the greater reconstruction project plan, but rather than setting the weight of the reconstruction budget largely on the hardware side, it is also possible to devote some of them to the management expenses. Looking back, it is a little doubtful whether it is really necessary to develop a large-scale hardware aspect. A huge budget is necessary for the maintenance of the hardware aspects, but more can be done with the same amount when it comes to management.

Of course, it is necessary to create a “place.” I am not against building a building. I would say it is also important to continue to invest in the things that will remain in the people, such as nurture, creating experiences, and also focusing on continuing activities after creating a place. 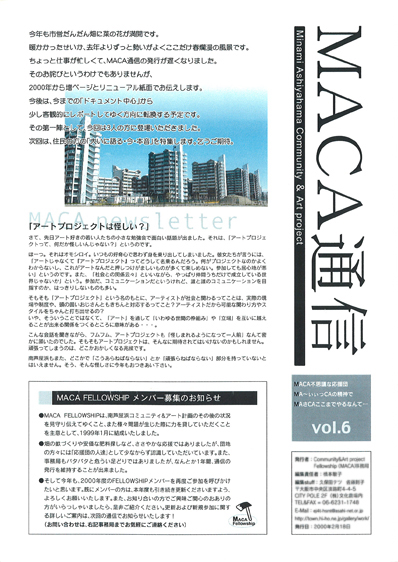 A project to set up artwork on the Minami Ashiyahama Complex constructed in Yogitsu-cho, Ashiya City. Furthermore, in order to create a community of residents, we worked on various creative workshops and worked in terraced fields. The goal is to create through the artwork, an opportunity for community formation that residents can actively participate in.”

Residents of the Minami Ashiyahama Complex

Total of 11 artworks installed. There are two kinds, works made by artists and those made with the participation of citizens and volunteers. Many make use of the public spaces designated to be installed in, such as lobbies and piloti. Participating artists are IDEALCOPY, Toru Oyamada, Hiroko Ikuzaki, Mima Akasaki, Yoshiko Inaba, Yukio Fujimoto, Hiroaki Kimura + Naoki Egawa, Riko Taho, Yoshiaki Miyamoto.